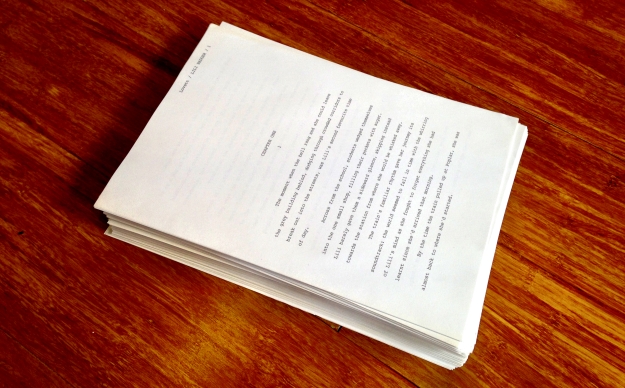 Whenever I mention I’ve written a novel and am in the process of looking for a publisher people ask whether I’ve thought about doing it myself. My response is usually that I have – briefly – but I’m pretty sure it’s not for me.

I don’t mean to be disparaging of people who have chosen to go down the self-publishing route. I know that for many it has proven to be a great way of getting their work out there: for some it has even been extremely lucrative, or has opened the doors to traditional publishing houses. On one level, if I’m honest, I think I need the validation of a publisher in order to truly be able to consider myself an author. And I definitely don’t think I’m cut out for the ruthless self-promotion it would take to do it alone.

It’s not like Lili Badger has even been out there for that long. I’ve had some brilliant feedback, and although she hasn’t found a home quite yet I’m quietly confident that when the time is right she will. Until then I would rather focusing on writing than shift over to the role of publisher. It’s an area I know little about, and I’m busy enough right now not to need that extra dimension.

I’m not naive enough to think that there will be no self-promotion involved in getting published through a traditional route. Even just the business of establishing myself as someone who writes has pushed the boundaries of my comfort zone in my attempts to get an awareness of myself and my work out there through the incredible networks that exist in social media. But I think that, for now at least, it’s gone far enough.

I believe in my work, but that doesn’t mean I would have the barefaced confidence to sell it in the way I could something written by somebody else. However much I might quietly love Lili Badger and her world, however much I might quietly believe that it is a book that should be read by teenagers and adults alike, it’s not something I’d feel confident standing alone and shouting from the rooftops. But modesty has no place in marketing. And where self-promotion can come across as vanity or arrogance, it’s a completely different matter if your work is being praised and promoted by people who have built their careers around just that.

So for now I will focus on immersing myself in the world of my second novel – I’m so looking forward to reading it in its entirety once the first draft is finished, on moving into the next phase of editing and rewriting and honing those raw words into something polished and complete. I will also continue to enjoy building my blog, a place which is satisfying any urgent desire for readers I may have whilst at the same time mapping the new world I find myself in as a writer and a mother. And hopefully before too long all these worlds will start to come together and I will be writing of my explorations in the uncharted territory of being a newly published author.

I am not so modest that I believe that day will never come, but I am modest enough to know that I need the truth of my words to be validated before I am happy to release them. And that is why – for now at least – I know that self-publishing is not the road for me.

Thank you to Sara from Mum turned Mom for inspiring this post with this week’s prompt (‘Truth is more important than modesty’ Roald Dahl).

10 thoughts on “Truth and modesty and self-publishing”