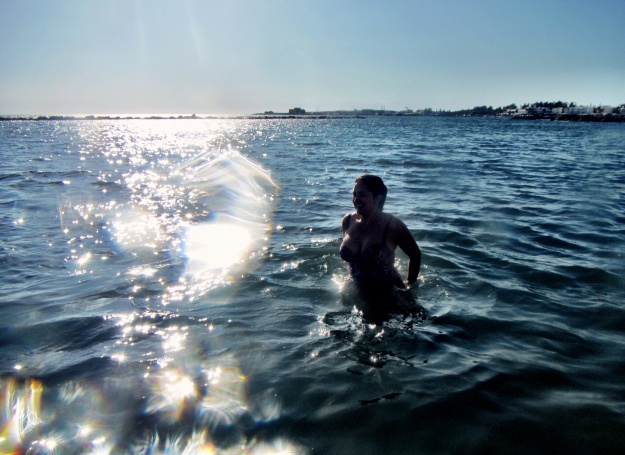 When we set off on holiday this Easter I had two main objectives: to relax and unwind after a hectic few months, and to spend some quality time with my little family. I think we achieved these rather well, but there was something else that happened that I hadn’t really been expecting or even realised I needed: over the week we were away, I gradually began to feel like my body was mine again – something I haven’t really been able to say since before I fell pregnant.

Since puberty, and in common with many other women I know, I’ve had a bit of a tricky relationship with my body. I struggled with anorexia as a teenager, and put myself through the mill with rather too much partying in the years that followed. Through my twenties I was plagued by an underlying paranoia about being frumpy and overweight, though looking at pictures of my younger self now I realise this was completely misplaced. My body was simply the physical manifestation of my self-esteem: the less happy I was, the more I hated what I saw in the mirror.

Through all of this I never stopped exercising – sometimes healthily, sometimes to excess. Having loved gymnastics as a kid I became obsessed with trampolining when I discovered my local club aged fourteen. It was that, actually, that stopped my anorexia being more damaging than it was: my coach declared one day that I was not allowed to come to training if I lost any more weight, and slowly but surely I began to find a balance. I kept the trampolining up through my late teens and twenties, funding my way through university by coaching at local sports centres. I also rediscovered gymnastics with tumbling classes at a circus school in East London, and loved going to yoga whenever I could slow down enough to fit it in. I also started going to the gym from time to time, though I’ve never had much patience with exercise just for the sake of it.

In the lead up to my wedding though I worked out a lot, made suddenly nervous by the idea of all those photographs. When we got married in the summer of 2011 I was probably in the best shape of my life. I was happy, and felt comfortable in my skin for the first time in many years.

Then when we decided to start trying for a baby the following spring my focus changed. I was terrified that the abuse I’d subjected my body to when I was younger would mean that I wouldn’t be able to have children, and focused everything on creating a nutrient rich environment to nurture a new life. It worked, and I fell pregnant more quickly than either of us had imagined, but that was just the beginning. I was scared all the way through that something would go wrong, stayed away from vigorous exercise and let myself gain probably a bit too much weight. I really wasn’t thinking about that though – I was following my instincts and doing what I felt would be best for our baby. The one thing I am really glad I stuck to was a pregnancy pilates class. That was never really about keeping in shape, but it did help keep me grounded as my body changed beyond recognition.

After Arthur was born, I was amazed at what my body had created and couldn’t begrudge it a single ounce of the extra weight it had acquired along the way. None of that mattered any more: my body had gone from being an awkward shell housing pent-up insecurities to a powerhouse that had grown a brand new person and delivered it into the world. And all that was important to me in the early days was to help that little person thrive: to work through the challenges we faced in establishing breastfeeding and keep myself strong and focused enough to be his mum.

Those days turned into months, and though I’ve shed a little weight along the way through breastfeeding and kept my core strong through babywearing my body is a long way from where it used to be. It’s not that I want my old body back – and I certainly wouldn’t want the angst and neuroses that went with it. But something has been niggling at me about wanting to reclaim a little of my body for myself, and that’s what happened on this holiday.

Between us, Leigh and I gave each other some time over the week to focus on ourselves. Just an hour or so a day, but even that felt pretty incredible after being on duty pretty much permanently for the past sixteen months. I did yoga and pilates classes, swam some lengths in the pool, went for a run. I even got to lie in the sun for a while, the warmth of its rays caressing my skin. And possibly best of all I enjoyed some proper swimming in the sea, back and forth along the bay as Leigh and Arthur played in the sand, feeling my breath quicken and my muscles tighten as my body slowly became my own again.

I’m not expecting to have it back entirely: I am still very much committed to breastfeeding Arthur – for how much longer I’m not sure any more. I still enjoy co-sleeping with him, even though it means I can never entirely relax and often wake up feeling achy and stiff. And I still intend to wear him in the sling for a while yet, which lovely as it is does restrict my movements rather more than I would like. But alongside all this I’m going to make an effort to get to know my body again, to give it the attention it deserves after everything it’s been through.

There’s a trampolining class I’ve been going to at the place Arthur does his baby gym, but I’m often too exhausted to give it my all. I’m going to try to rectify that, to make the most of the opportunity to do something physical that I love. I have a hula-hoop that was one of the main tools in my arsenal for getting fit for my wedding, and I’m going to try to pick that up again whenever I can – even just for ten minutes at a time. And I’m also going to try my best to fit in some of the other things I enjoy – swimming, yoga, running – and let Arthur and his Dad spend some time together, which I know they’ll love.

This holiday didn’t immediately transform my body, but it reminded me that it is mine, that it is strong and flexible and that I shouldn’t take those things for granted. I am looking forward to building on that over the weeks and months to come: to continuing to be a mother, but also remembering to be me as well.

Thank you to Sara at ‘Mum Turned Mom’ for inspiring this post with her prompt ‘In matters of healing the body or the mind, vacation is a true genius!’ (Mehmet Murat ildan).

7 thoughts on “Reclaiming my body”