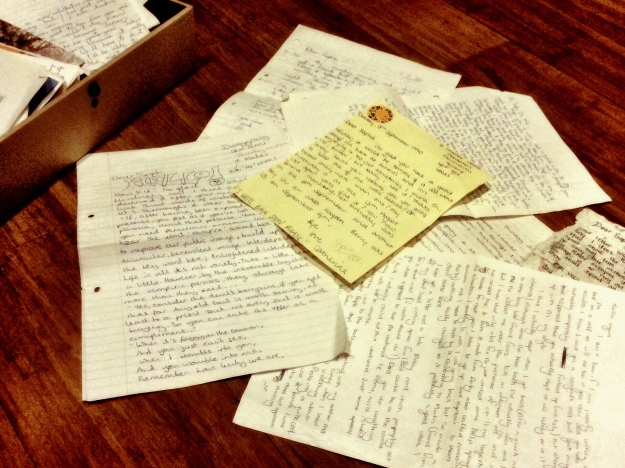 I had several very late nights last week. Not just because I was on a mission to get myself organised before the craziness of Christmas sets in, but because of what I found in the process.

I have always been a bit (a lot) of a hoarder. This is generally something I chastise myself for – resulting as it does in me being surrounded by piles and piles of stuff that I have no idea what to do with. But this week, as I sat on the floor surrounded by these pieces of paper dating back twenty five years and more, I was very glad that I find it so hard to throw anything away.

They were written on pages torn from files, on embossed notecards, on the backs of envelopes, on handmade paper, and collectively they transported me back to a very different time. A time before email. A time before text messages. A time before Facebook. Or WhatsApp. Or Twitter.

There are so many ways I keep in touch with people now – and probably if there weren’t I would find it hard to keep in touch with as many people as I do. But there is something incredibly touching about those fading and dog-eared pieces of paper, about the effort of writing out a message by hand, of finding a stamp and an envelope and a postbox.

Very few of the letters contained anything of much import. And yet in their banalities and ramblings they said more than a carefully considered few lines on a special occasion ever could. And often, hidden in the clutter of the everyday, there were flashes of the souls of those who wrote, of what I meant to them – and them to me.

I often look back on my later childhood and teenage years with feelings of sadness and regret. I struggled with depression and anxiety – the degree to which came across starkly in the tortured diaries I also discovered. But my memories of that – blurred themselves by my reluctance to fully transport myself back to the waves of misery I felt at the time – have clearly clouded the reality of the very good times I had in between, and the very, very good friends I had around me. How they put up with me I’ll never know; I fear my demons made me incredibly selfish at times.

As well as this quiet self-reflection, this archive from my past got me thinking about something else too. Letters are going to be very important in my third novel. It was a letter from that world, a particularly significant one, which was initially going to form the basis of this post. But that was before I found my stash. And what those letters have reminded me is how different communication was in life before the internet.

I’m looking forward to reading and rereading the letters that were sent to me so many years ago as I continue to unpick the lives of my main characters. So much of their friendship – and their love story – will unfold as they put pen to paper. The waiting for their letters to be read and answered, the delicious anticipation when an envelope addressed with familiar handwriting falls through the door, the peeling open of that envelope and becoming immersed in that contents for a few precious moments: all that will need to find its way into my novel.

And I think also it needs to find its way back into my life. I have so many friends and family who are not as geographically close as I would like them to be, and whilst the internet has brought with it the wonderful ability to keep up with what they’re doing with their days it will never replace the simplicity or the complexity of a letter.

So whilst I’m not normally one for new year’s resolutions, I can feel one simmering here – one that will mean that pile of letters from my past may still have the chance to grow.

Thank you to Sara over at Mum Turned Mom for inspiring this post with her prompt: a letter…

7 thoughts on “The lost art of letter writing”