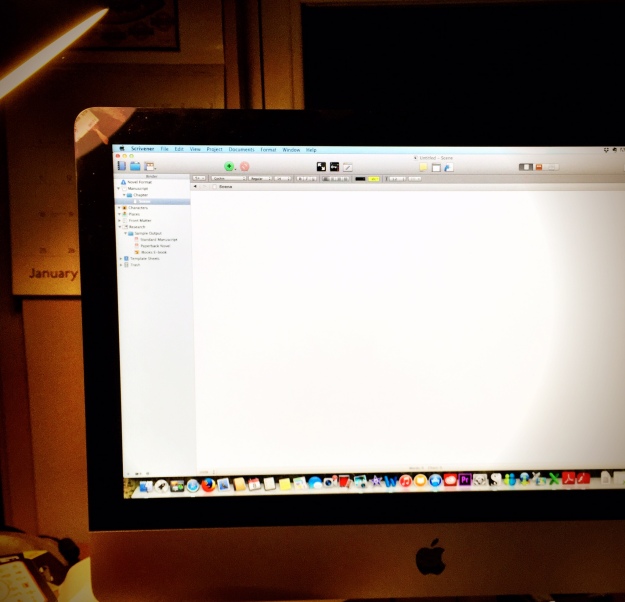 As regular readers will know, I’m currently embarking on another major edit of my second novel.

I’m cool with this – I really am. Although I was happy with most of the revisions I’d made in the last draft, something about it just isn’t sitting comfortably with me. One of the things I’m mulling over is just where the story should start. I have a few different options to play with, and one of them is below.

I would really appreciate some honest feedback on whether this, as the first few pages of a novel, would draw you in and make you want to read more. I’m particularly interested in the impression you get of the main character, Grace. Do you like her? Is she someone you could come to care about? Do you want to know what happens next?

Questions or suggestions or criticisms or ideas are all very welcome! I look forward to hearing your thoughts…

“He could’ve been so much hotter you know, with a bit of effort. That whole geek chic thing had a lot of promise…”

“Ah Cam! I didn’t dump him because he wasn’t hot enough.”

Cam looked at her over the rim of his glasses.

Grace felt her jaw tense as she downed the rest of her mojito. Part of her wanted to admit how much she was missing him, but she hoped her smile would mask that from her friend. She got herself together and looked up to find the barman waiting for her.

“It’s going to be one of those then huh?”

“Come on Cam. They’ll never keep me company, not on a school night.”

Molly and George were guarding a table, heads almost touching as they tried to hear each other above the din. Even at six the place was rammed, but then it was a Thursday.

“Fine, but just for you petal.”

“Love you,” Grace leant across to give him a hug as she motioned to the barman to bring another daiquiri, “you’ll grab our drinks yeah?”

Slipping off the stool in her high-waisted jeans, a glass in each hand balancing what remained of her mojito between them, Grace wove her way to her friends.

“One white wine spritzer with soda for the bride to be and one… ginger beer. What’s that about Moll?”

They clinked their glasses, and Grace tried to ignore the sadness hanging heavy in Molly’s face. It didn’t suit her. She knew she should talk to her about it all, but not tonight.

“So only a few weeks to go hey George? Best make the most of it.”

George smiled knowingly as she sipped her spritzer, “I guess.”

Her short dark hair framed her brown eyes perfectly, and that combined with the tailored jumpsuit gave her an air of eternal youth whilst at the same time she exuded a maturity beyond her years. At least Grace hoped it was beyond her years. At twenty-six, George was a year younger than her but seemed to have everything worked out. The job at the trendy gallery, the capacious flat in Farringdon, and of course the man. Barney was a few years older, devastatingly handsome if you liked that sort of thing, and on his way to becoming a Consultant at University College Hospital.

“So tell me again about the flowers,” intercepted Molly, leaving Grace once again standing on the sidelines.

Grace prodded at the mint leaves in the bottom of her glass with her straw, letting the excited chatter about peonies and petunias blend into the hubbub of the bar. She’d tried to be interested when talk had turned to bouquets before but failed miserably – it just wasn’t knowledge she wanted filling up her brain.

There was a time when George wouldn’t have know the difference between a daisy and a dahlia either. Grace remembered one Sunday at Columbia Road. It was early – they’d come straight from a club – and the stallholders were just setting up. It did look beautiful: colours bright against the grey of the tarmac, the freshness of the blooms contrasting with the weathered faces of those who sold them. Arm in arm, Grace and George had walked straight past the stalls and into The Royal Oak. Grace’s hair had been short then too, though she’d let it grow since. Two cropped heads bowed together, one black one red. They were still talking about Barney: George had turned up in tears the night before, worried he was having an affair with a nurse at the hospital. Grace knew they were destined to be together though; deep down she mourned for her comrade in arms but she couldn’t let that cloud her advice. When George eventually wove her way home a couple of hours later it was with a smile on her face, and a fortnight later Barney proposed.

Sucking the last of the rum out from the melting ice, Grace saw Cam looking apologetically at her from the other side of the room. His face was almost rubbery, and if you didn’t know better you’d think he was taking the piss. It was one of the things Grace loved about him though, how his expression transformed so completely with the slightest trigger.

A Latin looking guy had his hand on the pale skin of Cam’s arm, and now he was laughing at whatever it was Cam had just said. Grace almost didn’t want to interrupt – but she could seriously do with that drink. With a glance at the girls to confirm they wouldn’t miss her, she sidled over to Cam, plucking her drink out of his hand before he had time to notice she was there.

“Sorry darling!” he said effusively, “Do you remember Pedro? We met in Heaven back in January. He’s been away.”

The man leant and took her hand before kissing her on both cheeks. He was more than a little bit cute as it happened, but she was pretty sure she wasn’t his type.

“Please come and save me Cam. They’re talking about flowers again and I just don’t know how much more I can take.”

Cam turned to Pedro, “Our friend’s getting married.”

“Oh, amazing!” Pedro actually clapped his hands before turning to Grace, “You will make a beautiful bridesmaid.”

She’d been gutted when George had asked Molly to be a bridesmaid and not her. She’d asked her to do a reading, but it wasn’t the same.

“Shame. I think you’d look so pretty in a dress, with those flowers. You have the most incredible eyes. Like emeralds.”

He reached out and touched her cheek and Grace squirmed a little, fiddling with her fringe before stroking her auburn ponytail awkwardly. She really needed to meet someone: three months on her own and she’d fall for anything.

Thank you to Sara at Mum Turned Mom for inspiring me to share this opening in response to her prompt, ‘Beginnings’. I am also joining in with Nikki Young‘s Friday Fiction.

17 thoughts on “Where to start”