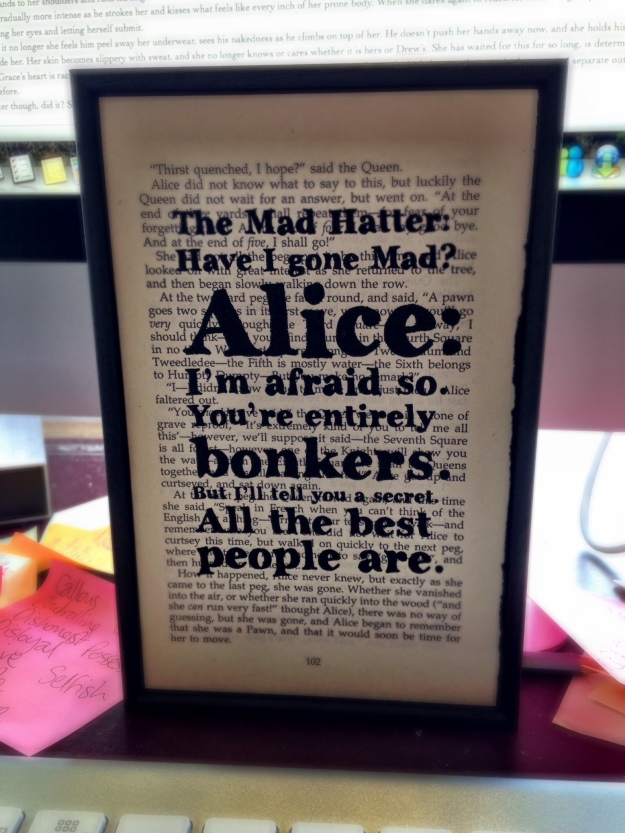 I have encountered this week a particularly pernicious breed of self-doubt.

On the surface, everything’s going pretty well with the edit – fantastically well in fact. I’m a few pages from hitting the halfway point, and well on my way to getting this round of redrafts completed by the end of the month. My characters are being extremely helpful as I try to tweak the various elements of their story, and the conceit I’ve adopted to deal with some of the bigger problems with the way it’s told seems to be working – at least to my mind.

But this is where the doubt is seeping in.

When I shared my thoughts about the challenge of writing dreams last week I got some really useful feedback, but it did make me realise how completely subjective peoples’ experiences of the world are: that something I think is entirely normal might be entirely alien to someone else. This might be particularly pronounced when it comes to dreams – they are after all not bound by any of the normal rules of reality. But it’s not only this that worries me.

Way back before the summer, as I got ready to release the first draft to my initial readers, I had a niggling sense that maybe my main character wasn’t very nice. I knew why – she’s on a bit of an emotional rollercoaster but doesn’t really know it, and that’s manifesting itself in a combination of abrasiveness and shyness, shutting herself away. I’d been there, and I felt sorry for her. I knew she didn’t mean to come across the way she did, and so did her friends. And anyway, she really wasn’t that bad.

But the feedback I got – not from everyone, but from people whose opinions I really trust – was that she was really quite unpleasant. Completely unlikeable in fact, to the point where important elements of the plot just cease to make sense.

I’m working on that – I can see where they’re coming from after all. But as I change the things Grace says and how she says them, as I try to get her to open up a bit and to demonstrate that she really is a friend worth having, I start to doubt myself. Maybe the reason she comes across so badly is because I’ve modelled her on myself, and maybe I’m just not all that likeable. Maybe my ideas about what makes someone worth caring about are just so far removed from what normal people think that I’m never going to be able to create a character who people will like enough to invest in her story.

And then this makes me wonder about everything else. Things I take for granted as thoughts or ideas or experiences that people will share, that I’m counting on to be able to create the common ground that will form the foundations of the world of my novel: maybe they’re just me, just my warped way of seeing things which will do nothing other than switch people off and make them look away.

I think maybe I’ve been spending too much time in my head.

And actually, even stepping back enough to write this makes me realise that things are probably ok. That this is just another one of those self-doubt demons, adopting an increasingly sophisticated guise as I become wise to his usual ways.

I know that I’m more than a little bit bonkers. And it is this that, hopefully, is going to lend my words the original edge they will need to be heard. If people don’t instinctively identify with the characters and ideas in my story then I will just need to make damned sure that my writing is strong enough to convince them to go beyond their comfort zone.