It could just as easily have been ‘door’ – both words in Arthur’s burgeoning vocabulary that he’s using to let me know he wants to be outdoors. Permanently, I reckon, if he got his way. Which definitely bodes well for all the camping trips we have planned for this summer!

This week, though, his need for fresh air and open space has definitely saved my sanity. I’ve been in the final throes of the novel: I started the week with about six thousand words left to write, and part of me just wanted to get it done. I was impatient, and excited to see how the details would pan out. I mean, I vaguely knew what was going to happen in the end, but not until it was written would I know for sure.

But combining writing with motherhood means I’m not entirely in charge of my schedule. Writing happens when Arthur naps, and in between – well, I have no doubt it did me good to get out and about.

On Monday the grey drizzle of the weekend lingered, yet still at lunchtime Arthur had his face up against the glass doors, longing to escape. I managed to distract him till after the post lunch writing session when miraculously the cloud began to clear and we went to let off some steam around Shoalstone pool.

On Tuesday it was glorious out, and it was all I could do to force myself to sit down at my computer. The story quickly captured me of course, but once Arthur had woken up I was very glad of the lunchtime picnic we’d planned with friends at Breakwater beach. 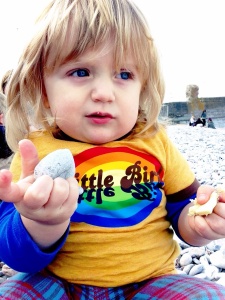 On Wednesday I woke up knowing that today was the day: I was on the final chapter, and as I’d been drifting off to sleep the night before the closing paragraph had come to me, so all I had to do was fill in the gaps. The words flowed as soon as Arthur drifted off for his morning nap, and I finished just as he was waking up so we could both enjoy a celebratory stroll to Berry Head in the afternoon. 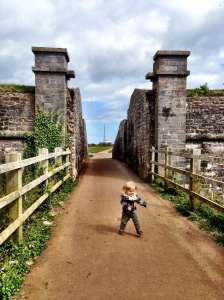 Yesterday the celebrations continued when we spent pretty much the whole day outdoors with some friends at Paignton Zoo. Arthur was in his element – especially when we found an area we’d not discovered before where he could get up close and personal with some friendly goats. 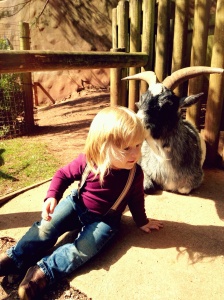 All in all this week’s been a bit of a whirlwind really. My brain has been on overdrive – first with the challenge of pulling the ninety thousand words of novel I’ve been writing to a satisfying close, then with the realisation that this thing that’s been giving me purpose for the last three months has ended. Having Arthur to shift my focus away from myself has been, as it always is, fantastic. And the fact that he’s wanted that focus to be on going OUT has been even better.