Those of you who’ve been following my blog for a while will know that the train is most definitely my favourite way to travel. So when the storms that battered the UK earlier this year took out the train line in Dawlish, effectively cutting Devon and Cornwall off from the rest of the UK, I was pretty gutted.

It wasn’t just the inconvenience of it all, though we did have a couple of mightily stressful trips to London with Arthur in the car as a result. And though it felt a little strange, as a non-driver, to have no alternative without the help of Leigh or my parents but a long and not terribly comfortable coach journey to get out of the county, that wasn’t what bothered me most either. The thing was that I loved that train line. I’ve travelled by train all over the world, and rarely if ever have I come across such a spectacular stretch of track: as the train passed through the red cliffs, alongside the sea which was some days millpond calm, others alive with waves and spray, you knew you that there could not be many better places on the planet to be.

At first there were doubts as to whether the line would ever be restored. The damage was severe: Brunel’s sea wall had disintegrated leaving the tracks hanging like a jungle rope walk above the waves below. There was talk of the line being diverted, of giving in to the forces of nature and accepting that such a stunning journey just wasn’t meant to be. For a while I entertained the idea that I might never travel on that route again. Fortunately, though, the pessimism was unfounded.

By some miracle, the railway engineers managed to get the damage fixed and the line back up and running in just eight weeks. And so it was that for our journey up to London this weekend we were back on the train. 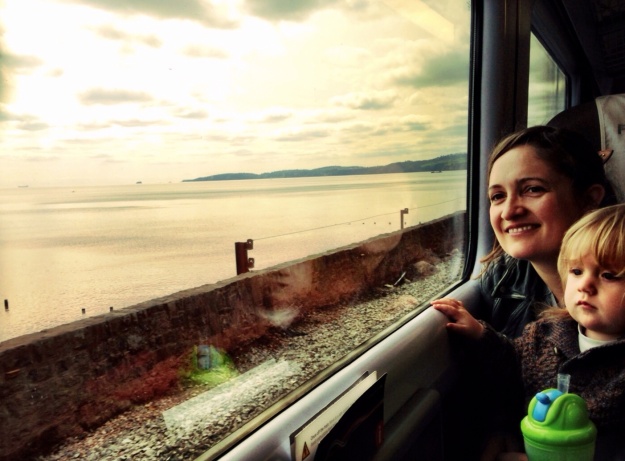 As we left Newton Abbot I was full of anticipation for the views that lay ahead, and the day did not disappoint. On the way to Exeter we once again passed through those majestic red cliffs, past boats resting on the mud at low tide, travelled alongside the sea which this time was millpond calm.

Arthur appreciated the views too – he was a bit too young to notice them last time we made the journey, but this trip he was pointing out the boats and water. Most of all though he appreciated being close to me and Leigh: he’s not 100% right now, with five teeth coming through as well as a nasty cough. What he needed most of all were cuddles – and those are always a bit tricky to provide when he’s strapped up in the back seat of the car. 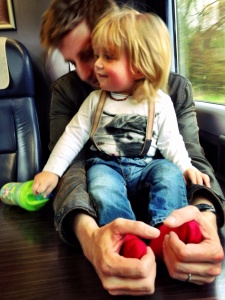 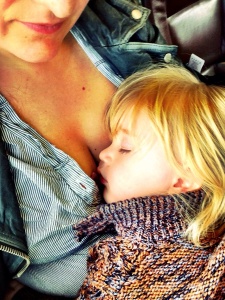 So hurrah for the railway engineers and for the newly-restored Dawlish line. I may have always loved it, but I have also taken its precarious existence a little more for granted than I probably should. From now on I will definitely appreciate it a whole lot more every time we’re lucky enough to make that journey.

16 thoughts on “Back on the train”