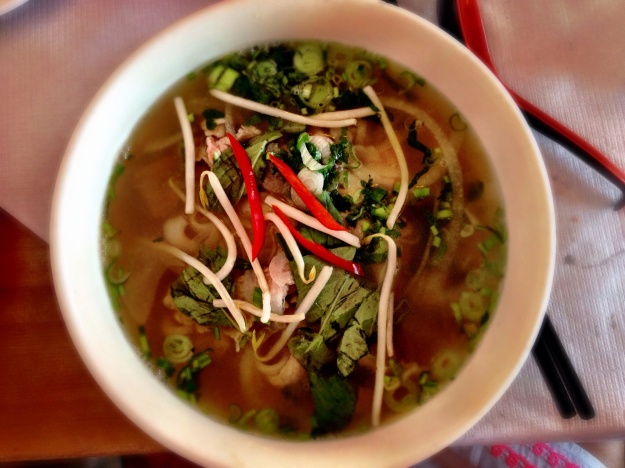 Often people ask me what I miss most about not living in London any more, and the answer’s always the same. There’s the people we left behind of course, but actually in some ways the physical distance between us now means that we make more effort to see the people who really matter. It’s amazing how knowing someone’s only half an hour away can turn into an excuse not to see them yet the opposite becomes true when meeting up’s a real mission.

But I digress. The thing I really miss about not living in London any more is the food. It’s not like there’s not good food in Devon: the potential for really fresh, really local ingredients is of course much higher than in the city. But without the melting pot of cultures that I used to feel privileged to be a part of, our menu is much more limited.

Where we used to live in London we were surrounded by fantastic Vietnamese restaurants. There was a big Turkish community too, so the kebabs were out of this world. Not to mention the Punjabi lamb chops at Tayyabs, the Sunday dim sum at Yi Ban, the Argentinian steak at Buen Ayre and the special-occassion sushi at Soseki.

It’s Vietnamese food I always seek out first when we go back though. There’s something about the fresh herbs, the slippery noodles, the seafood. And I especially love pho. It’s like the best sort of comfort food, warming and flavourful and healthy. I miss the ritual of the little plate of basil and bean sprouts and chilli, alternating spoons of broth with digging around with chopsticks for more substantial morsels of deliciousness.

When we were on honeymoon in Vietnam I had it for breakfast every day. We’ve tried to recreate it ourselves to varying degrees of success, but without the authentic ingredients it’s never quite the same. The bowl above was devoured moments after the photo was taken in Tre Viet, a restaurant I’d heartily recommend if ever you find yourself hungry on Mare Street.

Joining in with The Alphabet Photography Project over at PODcast.