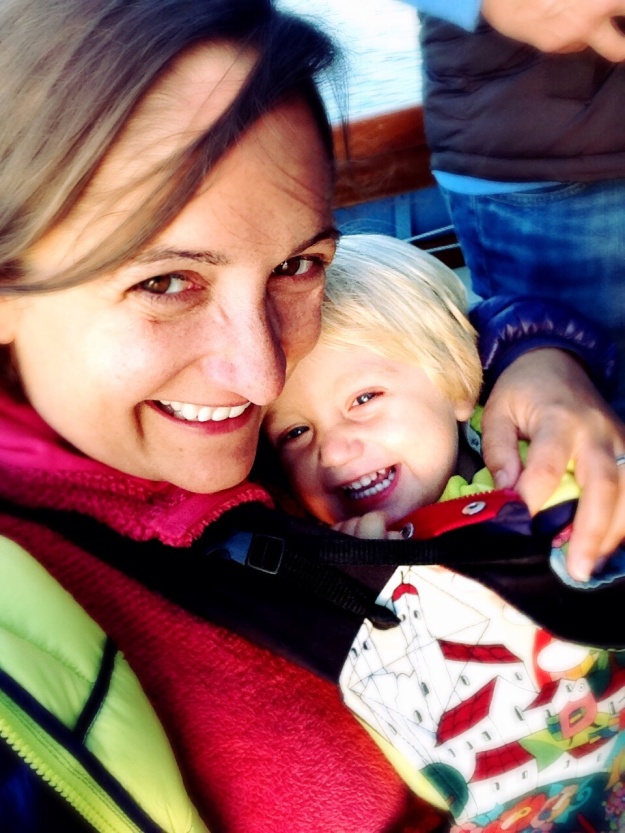 Twenty months ago today, you came into the world. That might not seem like a particularly important milestone. I meant to make more of your half birthday – that day in midsummer when you turned eighteen months – but there was just too much going on to stop and reflect.

It’s generally been a summer like that to be honest. We’ve had so many adventures – boating and swimming and camping and exploring. I’ve written about lots of them here, snatching minutes to upload photos and try to capture the things that you’ve been up to. But in focusing on what we’ve been doing I fear I’ve missed some of the most significant things that have happened this summer: the changes that I’ve seen in you, all the ways you’ve grown and developed.

Language has been a really big one. You have so many words! We stopped counting back in June some time, and it was seventy seven then. I reckon it might be double that by now – you’re a brilliant mimic, not only of the words themselves but of the intonation too. It’s not just that though – you can use your words independently as well, naming things and making your requests. You’re so thrilled when we understand you, the glee literally lights up your face.

I think you still understand way more than you can vocalise, and that might be why we’re starting to get some tantrums. That frustration we caught glimpses of when you were younger is showing itself more clearly now. It comes from not being able to get your point across I think, from the world going from making perfect sense to suddenly slipping through your fingers. You are still such wonderful company, but there are times when you seem so unhappy in your skin that I wonder if anything I can say or do will make it better.

It’s times like those I’m really glad I’m still wearing you regularly, still nursing you several times a day. If I hold you close, if we focus back in on that special bond we share, then the angst soon passes. The world is a pretty confusing place after all – it’s totally understandable that there are things that won’t make sense to you.

And despite that closeness being so important sometimes, there’s no doubt that you’re becoming more independent too. You love to sit on your own little chair at your own little table in the kitchen, to shake off my hand whenever you can and wander off by yourself, following your own path.

Sometimes you’ll then decide you want company, but on your terms. You’ll reach up expectantly and say ‘hand?’, mainly to Daddy as you lead him into your world. I know he’s treasured every moment he’s been able to spend with you this summer and he’s going to miss you dreadfully when he goes back to school.

You’ve had lots of different playmates over the summer, and you’ve so enjoyed all the different interactions, particularly with children a few years older than you. It almost makes me sad to watch you mistake strangers for your new friends who we’ve had to say goodbye to for now, to hear you call for Abbie or Fifi in the street, but I know we’ll see them again soon and you’re learning something important about friendship and memory. You’ve had the chance to nurture relationships with family too – with Grampa and Mimi, with your uncles and aunts and cousins. Again you’ll sit and run through their names when they’re not here. I hope you won’t be too lonely when you’re stuck with only me most of the time come September. We have lots of fun things planned though, lots of local friends to catch up with. It’ll be good for you to hang out with children your own age, to start to learn those big skills like sharing and kindness and taking turns.

It’s fascinating to watch your interests and preferences develop. You still love music, your little ukulele guitar but also the piano and the drum. You love to move too – dancing, running, climbing, jumping. You’re still working on that last one – it makes me smile to watch you squat down with such focus in your face and thrust yourself upwards only to find your toes are still in contact with the ground. You will get there soon, I promise.

You’ve had your fair share of scrapes as you’ve found your feet this summer. A succession of firsts that would never have come at all if I’d have had my way: first stubbed toe, first nose bleed, first scraped knee. I guess the bumps and bruises are all part of it though. A smooth sea never made a skilled sailor.

And I think I can safely say that for the most part your world is a happy one. That word itself has become increasingly important to you, it’s become our little ‘I love you’: ‘Happy Arthur, happy daddy, happy mummy’ you’ll say, with a look of pure contentment on your face. You get such joy from the joy of others too: sitting around the table joining in with the laughter of adults at some grown up joke, waiting for a lull before you proclaim it ‘funny’. I don’t know whether you know that will provoke even more laughter, but it invariably does.

There’s so much I haven’t found a way to fit in here. Your love of trains and tractors and anything with wheels. The way you can almost count to ten when the mood takes you but somewhere along the way have got six and seven mixed up with chicken and motorbike. How your perception of crayons is slowly shifting from tasty snack to something to create pictures with, and how I want to frame every one even though I know we’d soon need another house to keep them all.

I have big plans for the autumn, but I’m really looking forward to hanging out with you too. To savouring everything you learn and say and do, and helping you make sense of this crazy world. The memories of summer will carry us through the cooler days and darker nights, and I know you will continue to astound me.

All my love for always,

Thank you to Sara at Mum Turned Mom for inspiring this post with her prompt ‘Memories of summer’.