On Saturday afternoon Arthur and I decided to make muffins. Faced with an abundance of blueberries and very ripe bananas, as well as a few hours to kill whilst Leigh knuckled down to some revision, there was nothing else for it really.

I decided to go for a paleo recipe – coconut flour, coconut oil and no added sugar. We’re not strictly paleo here by any means, but I do like to mix things up a bit. And if I’m taking the time to bake I figure it makes sense to go for something nutritious and delicious – especially since Arthur’s current diet is beginning to look a bit stereotypically toddler-esque for my liking…

I’m pleased to say that Arthur took the whole thing very seriously. He was particularly taken with the gloopiness of the eggs, and almost managed to whisk them without spilling half of them on the counter. Almost.

He was happy for me to keep an eye on the recipe, resuming his duties once everything was ready for the final mix – again using the worktop as the testing ground for the consistency, natch. 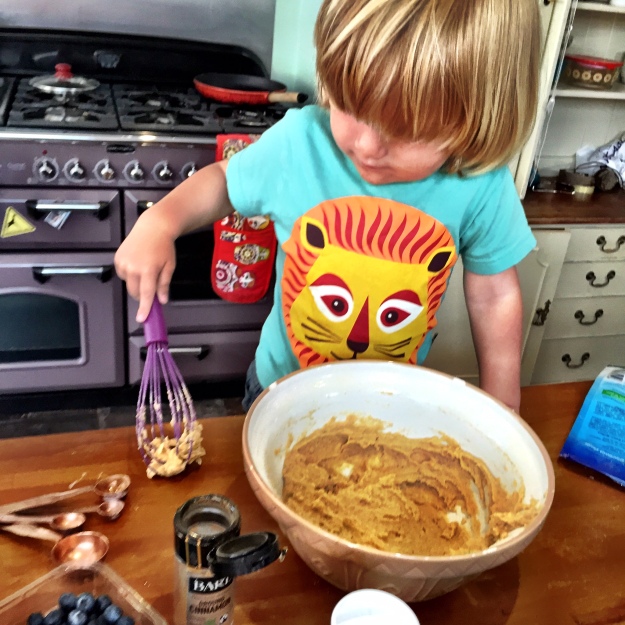 (I decided at this point that the batter was looking a little bit too solid, and added a generous glut of coconut milk to the mix. This might not necessarily have been a very good idea…)

Arthur’s attention wavered at this point, and he left me to get the muffins into their cases and on to cook whilst he got started on a second batch.

These ones took way less time to cook, and it was mere seconds before he ran off to grab his unsuspecting taster. 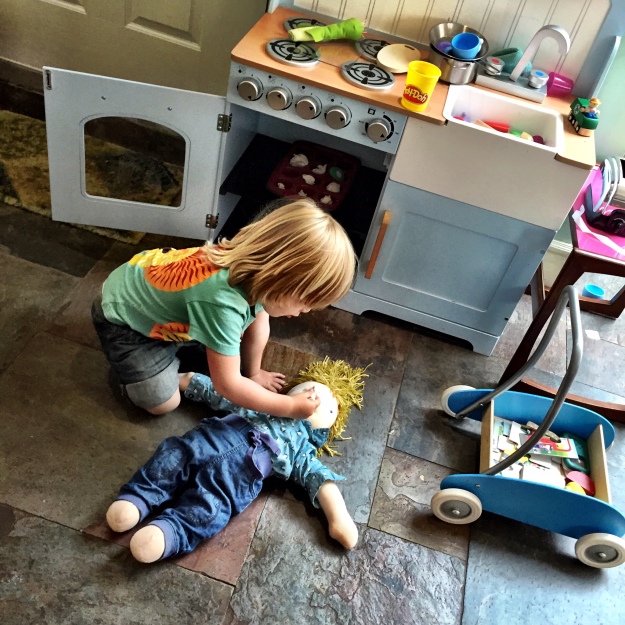 I can only imagine that dolly decided they needed a little more time, as they were soon back in the oven for another burst of cooking.

By now fortunately the original bluenana muffins were starting to waft their almost-cooked scent across the kitchen, and Arthur could barely contain his excitement.

A few minutes later and the muffins were finally ready. Despite my insistence that they needed to cool, Arthur was straight up there to check for himself, blowing on them impatiently.

He just about managed to hold off until they were no longer boiling hot, and proceeded over the next hour or so to eat six. Six! I’m very glad I went for a healthy recipe is all I can say…

I have to admit though that I was not overly enamoured with them. It may well have been the extra coconut milk but fresh out of the oven they were a bit soggy for my liking… We managed to keep a few back and they were admittedly much tastier after a day in the fridge. Though Arthur wasn’t interested in them at all then! Go figure…

All in all it was a highly entertaining use of a couple of hours, not just the ‘real’ baking, but Arthur’s seamless segue into his imagination too. I will definitely revisit this recipe and see if I can’t perfect it a little: I’ll report back when I’ve had a bit of a play… In the meantime though there is a bunch of rhubarb in the fridge crying out to be made into oaty crumble bars. That’s tomorrow afternoon sorted then!