Between Valentine’s, an anniversary and Mother’s Day we have had a lot of flowers in the house recently. Which of course has been lovely, but for Arthur has also proved an irresistible draw. Several times I have come into the kitchen and found him looking sheepish with pollen on his fingers and petals scattered on the floor at his feet. It’s hard to get cross, because I know he’s just curious. So this week I thought I’d play him at his own game… 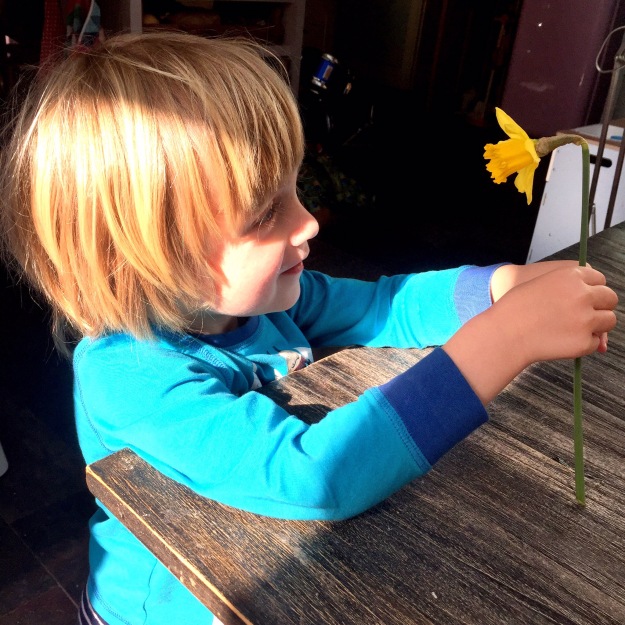 Our garden is generally looking a little sorry for itself at the moment, but in the midst of all the work that needs doing there is a determined patch of daffodils that Arthur and I have watched grow and flower into a sea of yellow and green. One particularly dreary morning I ventured out whilst Arthur watched me through the rain in his pyjamas, sticking a tentative toe over the threshold before deciding that inside was a much better place to be.

I picked out a daffodil and handed it over, explaining that I thought it might be interesting to break it apart together and see what was inside. He was a bit reticent at first, taking time to hold and admire the whole flower as the rain broke and sun began streaming in through the windows. I’d never actually seen him handle a flower so carefully. Still, it didn’t take him long before he took me up on my offer. 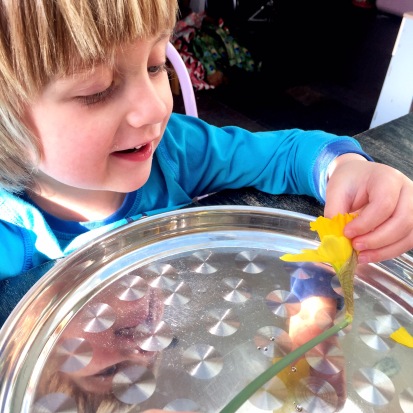 He explored the daffodil’s trumpet before taking it apart in strips, then gently peeling away the petals. I encouraged him to smooth the pollen with his fingertip, and we paused at that point to talk about what it was all for.

We talked about the bright yellow colour attracting the bees, who buzzed around between the flowers and took the pollen from stigma to stamen so the flowers could make babies. He was curious, so I found a video on YouTube showing a bee doing exactly that, and he watched, intrigued. He’s generally quite interested in bees at the moment because of his current obsession with Winne the Pooh (when I asked him what he thought the pollen might taste of he answered quite confidently ‘honey’), but that’s another story…

After our little introduction to botany he wandered off to do something else for a while, and when he came back I’d set out paper and glue so he could stick the parts of the daffodil on. He was keen to cut up the stem at this point – a good time to practise using scissors, and discover that the metal ones were much more effective for the job than plastic. We talked too about how the stem was like a straw, sucking up water to keep the flower alive.

I had thought of labelling the parts of the flower once he’d stuck them down, but he’d lost interest by that point and it probably would have been a step too far anyway! As it was he began to understand, I think, a little about the fascinating construction of a flower, laying down foundations for future conversations when we’re out and about.

And now I come to think of it he has held back from randomly destroying any flowers since, so maybe it has served to satisfy the curiousity that was driving him – for now at least.

*A little note of caution: daffodils, whilst fascinating, are not edible and are actually toxic if consumed. I made sure Arthur was aware of this and washed his hands carefully after our exploration. Please make sure you supervise your little ones closely and seek medical attention if they do accidentally ingest any part of a daffodil.*