I’ve been mulling over various different options for this post today – Arthur’s delight in playing with sand at Paignton sea front, his growing interest in helping in the kitchen, the hours of roleplay that followed when we found a Buzz Lightyear costume in the charity shop – but it’s actually an almost inconsequential moment that I keep coming back to.

Leigh was late home on Friday, but with it being the weekend I figured we’d wait for him before pushing on to bed after Arthur had finished his dinner. That’s daddy time, generally – the chats about the day and the washing things and the stories – and both of them miss it on the odd occasions when he can’t be around.

I didn’t really have a plan – which could, at the end of a long day, have ended in disaster – but as it was distraction came in the most unexpected form. I’d been unpacking a delivery whilst Arthur ate his dinner, and it had arrived in a box filled with little polystyrene pellets. I normally whip them away from Arthur whenever I order from this company, but on Friday I guess I was feeling a bit more relaxed and so I let him explore. And the resulting play was, I think, the best fun he’d had all week. 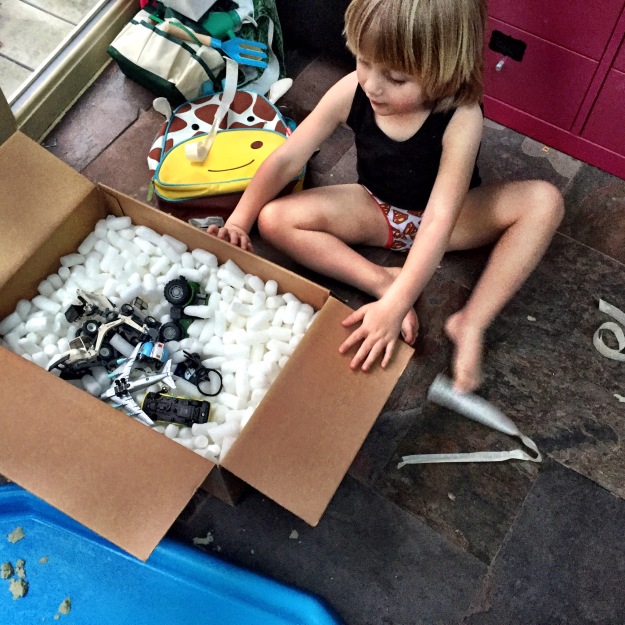 Things started pretty simply: having watched me unpack my order from the box, he proceeded to fill it with all of his precious things and offer it to me as a present.

Then once I’d gone through and admired each of his ‘gifts’, he decided that he wanted to see what it was like in there himself.

Then of course came the tipping out, and the moment when on another day I might have put a halt to all of it. The tuff spot comes in handy for that – even if it didn’t contain the pellets for long… 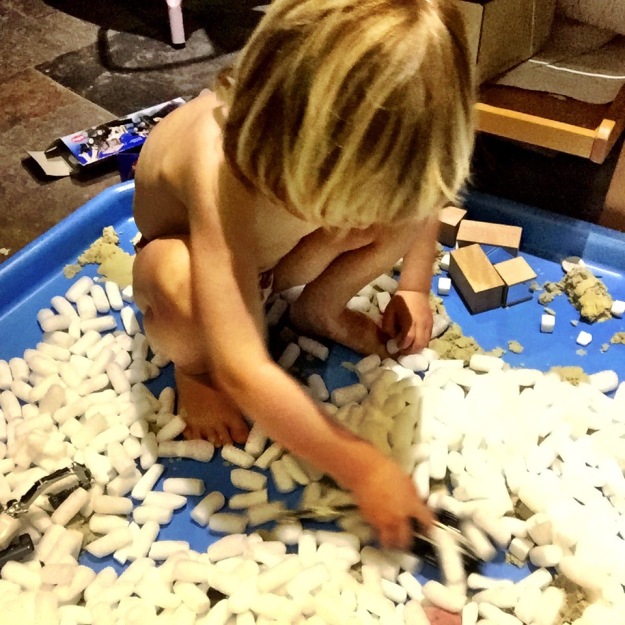 He piled them up and drove his diggers into them, threw them in the air to see how they fell, smooshed them and squeezed them and generally just experimented with this new material that had previously been off limits.

And whilst he played I sat and watched and laughed, until his daddy arrived at the door and came in to find us giggling in the midst of a pile of mess. Fortunately he got it too.

I couldn’t tell you exactly what Arthur learnt from this little bit of unplanned and unstructured play, but still it felt important: to give him permission to go a little bit wild at the end of the day, to go with the flow even if a part of me was raising some serious eyebrows, to let him lead and explore and make us both laugh.

As much as it’s great to have some carefully thought out activities on hand too I think it is moments like this that remind me why I am leaning towards unschooling, and the freedom it gives my son to be who he wants to be.

5 thoughts on “Going with the flow”