It’s been a bit of a challenging week this week. I’ve still had loads to organise to get to a position where I feel like I’m ready for the craziness of December. On top of that we’ve had lots going on to take us out of the house – what with the rugby in Cardiff last weekend and playdates for Arthur, governors and trustees meetings and chats about possible avenues for researching my next novel, and getting things together for a whistle-stop trip to London this weekend, it’s all been a bit hectic! And then on top of THAT Arthur’s been a bit under the weather – nothing serious (don’t worry mum), but enough that he’s been a bit grumpy and we’ve had three nights now of even more broken sleep than usual.

But in between all of that, the over-riding feeling for me this week is that it’s beginning to look an awful lot like Christmas. And I can’t help but begin to get a teensy bit excited.

Arthur’s music group has been becoming increasingly festive over the past couple of weeks, with yummy Christmas spices, a serious dose of tinsel and yesterday an introduction to decorating the tree!

The tree’s up in Brixham harbour too, waiting patiently for the big Christmas illuminations switch on this weekend. I’m a bit gutted we’re going to miss it actually – there’s going to be a lantern parade and fireworks and everything – but my lovely Barcelona friends are over in London for one weekend only.

An advantage of not being at home this weekend is that it’s meant we’ve had to get very efficient with our own preparations and our tree actually went up yesterday! More on that in another post though…

I’ve got Arthur’s advent calendar all sorted too, ready for when we get home on the evening of the 1st of December. I loved putting all the little treats in their pockets (and am happy to say they all fitted!). I can’t wait to see what he makes of it all. 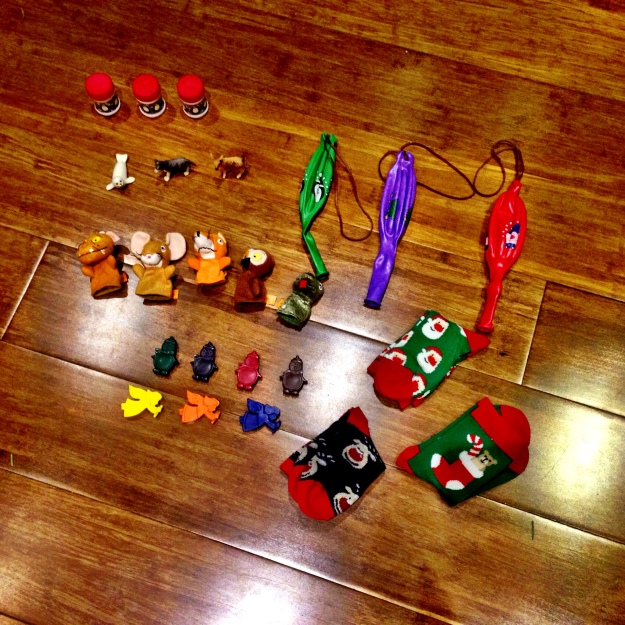 He’s already enjoyed some Christmas crafting – discovering glitter for the first time as we created the artwork for his Christmas cards.

My crafting is underway too, though I can’t give too much away about that without spoiling peoples’ surprises! I will say though that the little project I did yesterday might be my favourite ‘make’ yet, and I’m already looking forward to blogging about it in January.

So all in all a pretty festive week, and the start of what I think is going to be a very special festive season now that Arthur is old enough to have a bit more of a sense of what’s going on. I have a feeling his mind might be blown by the sparkle and spectacle of the decorations in London. And on that note I’d better get a move on – we have a train to catch!