It feels like I’ve been writing about Arthur’s love of lego a lot recently, but it is such an important part of his life at the moment that it’s hard not to.

It’s actually been about six weeks since I first focused on his growing interest in lego in depth, and reading back over where he was then it is quite astonishing how much his play has developed. He has fully embraced his small lego now, and will spend literally hours building increasingly complex creations. 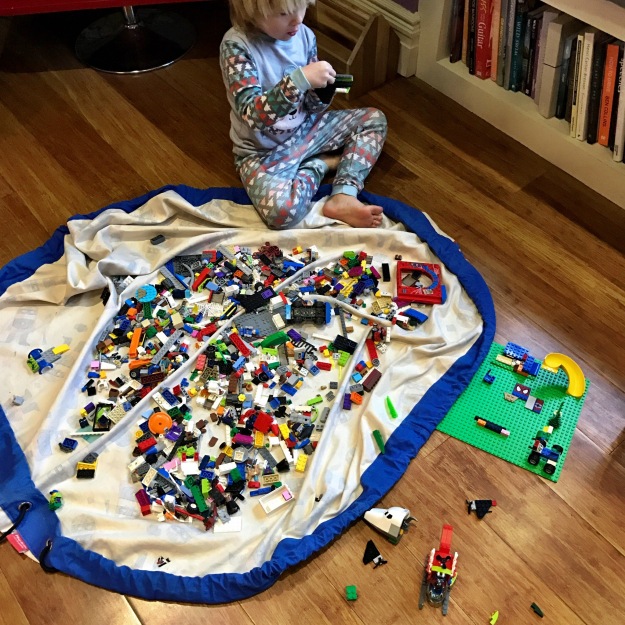 In terms of our unschooling relationship, it’s a really important development: suddenly spaces have opened up in the rhythm of our day when I know Arthur is actively engaged in something he is passionate about and I can turn my attention elsewhere guilt-free. Occasionally I have to take him along with me to meetings, and now he actually has something to do – something that isn’t entirely reliant on the iPad.

Intermittently he will want to show me something he has created, and we talk through his ideas and how he’s brought them to life, and then he will bounce off to develop something else, new stories and whole worlds emanating from the plastic blocks.

He likes it when Leigh or I build with him too – and that as well is opening up a whole other angle on the parallel learning that is central to our aspirations for our unschooling journey. There is something about focusing on those little blocks that tunes out distractions and makes it easier just to be in the moment, together. Occasionally, especially when new lego finds its way into the mix, that togetherness is centred by the attempt to build something that follows instructions, but actually mainly we just use the jumble of pieces from all the different little kits to build the structures in our imaginations.

I think it’s kinda important that Arthur doesn’t feel overly bound to the rules, that he embraces the freedom to make what he wants rather than what he’s ‘supposed’ to. The other thing that’s I love about the way he plays is that he totally accepts the transience of his creations. There were a few hairy moments in the early days, when he would drop something he had made or press too heavily on a brick causing the whole thing to fall apart, and his world would fall apart too. Now, though, he will play with something he has made for a while before choosing to transform it into something else – and if he accidentally breaks it he is starting to see it as an opportunity rather than a disaster.

He’s starting to articulate this process too. As well as his own advent calendar, he is enthusiastically sharing Daddy’s – a lego Star Wars one. I heard a squeal of delight when they opened yesterday’s window, and a few minutes later he came running in clutching a small TIE fighter. He was so pleased with it, but said unprompted “If it breaks I can make it again – or it can turn into something else!”.

This potential for open-ended play is one of the things I love most about lego, and which elevates it from everyday toy status to something approaching perfection. Coincidentally I came across an article yesterday which was claiming exactly that – celebrating the longevity of lego in the toy market and exploring the ways in which it has changed.

There was much about the author’s enthusiasm that I agreed wholeheartedly with, but her conclusions were not unreservedly positive – honing in on a particular family, she lamented the move towards the very specific kits that now dominate lego’s sales.

It’s a concern I had myself before I watched how Arthur played. Lego was a big deal in our house growing up – my brothers and I would while away whole days building together in the specially constructed playroom Dad had built to maximise the potential of those little bricks. But I don’t remember ever following instructions. I’m not even sure if there WERE any instructions – and there certainly was only a fraction of the variety of bricks that Arthur now has at his disposal.

I worried that by being exposed at such a young age to these complex kits, ones which enabled him to build Spiderman’s lair, or a scale model of a space shuttle, he would not be able to see beyond them to the infinite potential this toy held.

Somehow, though, in the space of a few short weeks, he has decided that whilst the official creations are cool, the things he can create by putting their very specific components to new use are way, way cooler.

And I can totally get on board with that.