On a national level, this feels like the most important election we have participated in for a long time. Recent weeks have been filled with optimistic anticipation, a sense that things might really have been about to change for the better. I have been buoyed along by a surge in interest and engagement from people whose views sit firmly on the left. Now that the results of the parliamentary election are in, I have been brought sharply down to earth. But I still have the little corner of hope carved out by my last minute leap into local politics.

For the first time, I will be able to say that I have not just talked the talk about the importance of engaging in politics. I may only be standing for our little town council, but suddenly, in the face of a national picture which is so far removed from my political values, that feels like the first step in a journey which may have considerably wider scope than I’d previously imagined.

I will not know until tomorrow whether I have been elected. But whatever the outcome there are some important things that I have learnt along the way.

Politics, on every level, is pretty intimidating. I’ve toyed with the idea of being a councillor for years, but (aside from the difficulty of finding time for it alongside a teaching career) I never really knew how to take the first step – or even if I really wanted to.

For me, it took an encouraging nudge from a community figure I admire against the backdrop of a group wanting to abolish our town council to make me realise that I needed to stand up and be counted. A couple of my fellow candidates fall into this category too, and we have brought with us a swathe of people who, were it not for knowing people standing for election, might not have taken much interest in what was going on locally – or indeed nationally. And others who were always interested, but who (like me) had been seeking an outlet for that political drive.

There’s definitely a need for more people to get their voices heard. It’s been a while since I did anything where I was categorised as young, but suddenly – despite the fact that I am closer to my fortieth birthday than any other milestone – I find myself representing the youth voice. There’s clearly some work to be done there. Not to mention the one third of people eligible to vote in the UK who once again failed, for whatever reason, to exercise their democratic right in this election.

But overall it’s actually been quite inspiring – the thought that, for all the uncertainty we’re now facing as a country, there might just be hope for the future in people who have previously felt disenfranchised and are ready now to stand up and make their mark.

This may have been naive of me, but I honestly had no idea quite how much legwork was involved in an election campaign. Our town council elections are admittedly unusual this time round in that there has been some stiff competition for the available seats. And as a result, in the four weeks since I came on board as a council candidate, I have walked about 100km delivering leaflets. 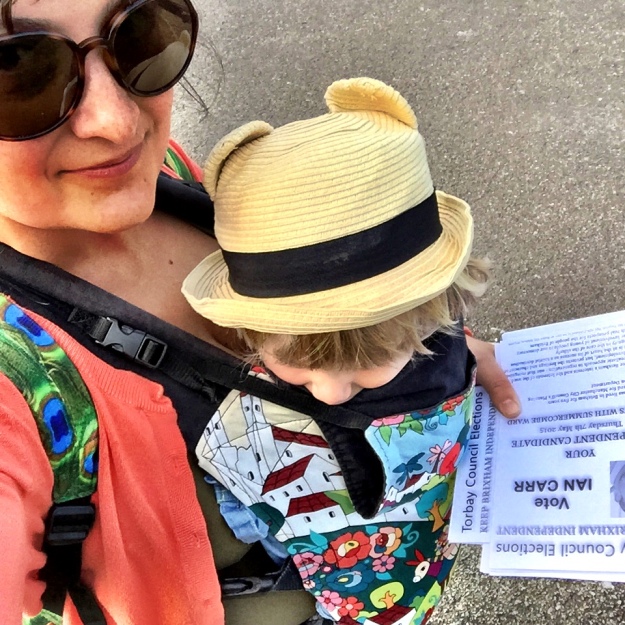 Up and down hills and endless flights of steps, dodging traffic and dogs, all whilst wearing my toddler. I didn’t have much time to think about the wisdom of it all this time round, but if I do this again I’m certainly going to look into how much influence this trekking actually has. I would like to think there is more scope in social media – I certainly had some great interactions on twitter and Facebook.

But there is, admittedly, nothing quite like actual face to face conversation – and with the turnout at local meetings being so low there is still much to be said for the power of turning up on people’s’ doorsteps.

3) Sticking your neck out really attracts the trolls

I don’t know if this is a general thing or whether we have an unusual number of resident trolls in Brixham, but I was bemused to see the onslaught of online abuse I received within days of standing for election. Both on twitter and in the comments section of our local paper I found myself targeted with some quite unpleasant – and borderline libellous – attacks.

I’m not one to bow to bullying, and fortunately once I’d lodged complaints with the police, with twitter and with the local newspaper editor the nastiness seemed to die down.

It did all make me wonder though why people would want to put themselves through it. I never even said anything controversial – just the mere act of standing for election was enough.

I had an interesting chat with Sarah Wollaston, my (now re-elected) local MP. She is no stranger to online attacks herself, but said that from her experience it’s often a lot worse – and definitely a lot more personal – the lower down the political food chain you get. The problem with that is it could genuinely cut peoples’ political ambitions off at the knees before they even have time to get started – it’s one thing to say that people just need to develop thicker skins, but it’s clearly a massive block to engagement for anyone who would rather not be subject to abuse.

My first meeting in the course of this campaign I attended with my two-year old. It was in the evening, and his dad was working late. With no-one else around to look after him it was a case of take him with me or not go at all. I’m really glad I took the decision to go – and that he slept in the sling for the majority of the meeting – but I definitely got some strange looks.

If I am elected, then I think I’m just going to have to get used to those. As someone who has chosen not to go back to work outside the home but rather combine full time motherhood with writing and other endeavours I don’t have easily accessible childcare. I can’t afford to be paying someone to look after my son so I can attend council meetings or voluntary engagements, so unless it would be noticeably disruptive for him to be there he will be coming along for the ride.

And there is of course the precedent set by Licia Ronzulli, the Italian MEP who has challenged people’s perceptions of the place of children in the world of politics.

5) Finding the right words counts for an awful lot

Having come into the campaign to stand up for Brixham council so late on I have repeatedly felt a long way out of my depth. My teaching experience, and prior to that many years of drama and debating, has left me with the skills to stand up and say my piece in front of a crowd, but that did not stop my palms from sweating and my voice shaking when I actually did it.

I certainly don’t think I’ve said anything particularly extraordinary – talk of working together, of giving people a voice, of looking to the future rather than being stuck in the past – but when I have spoken it has seemed to strike a chord. From the vitriol of the online haters to the people stopping me in the street to say how glad they are that I am speaking out it is strange to realise that my words have had an impact.

I suppose it’s like the blog too really – whether spoken or written it is always satisfying to hit on just the right way of putting something to draw people in. I just need to make sure now that I have the knowledge, understanding and integrity underneath it all to deserve people’s trust.

Suffice to say I have been surprised by how tough but also how exciting the last few weeks have been. I shall find out tomorrow whether it has all been enough to save the town council – and indeed to get me a seat on it – but whether it has or not a political spark has definitely been ignited within me. And I am intrigued to see where that may lead.

My word of the week this week is democracy.