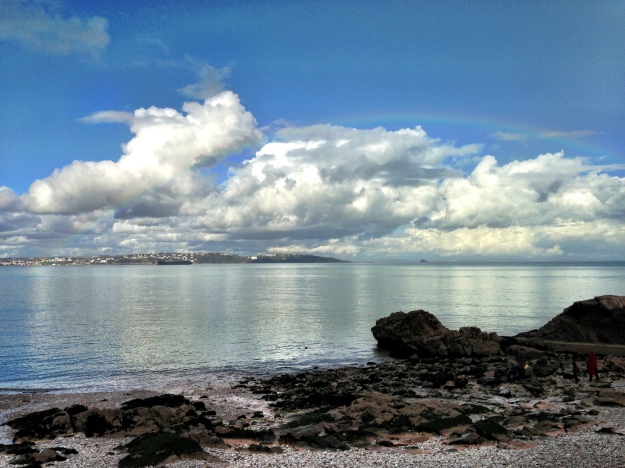 Another character development exercise, this time exploring the relationship my female protagonist had with her mother during her teenage years. She is fifteen when this scene takes place, sometime in the autumn after another long, heady summer staying with her grandparents by the sea.

“I just don’t know how I’m supposed to be thankful for this!”

As soon as the words left my mouth I was ashamed, but at the same time a thrill bubbled up deep inside of me. I couldn’t help myself.

“I mean, it’s no kind of life is it? You and Dad – you barely see each other. And you couldn’t give a stuff about me.”

I willed her to speak but she just stood there, quiet now. She’d goaded me to this, nagging and nagging. And now she wouldn’t even answer me. My heart raced in my chest as my mind churned through all of the most hurtful things it could think of that might provoke a response. Something stopped me though – I still wasn’t brave enough to say them out loud.

When she did finally speak her tone was low and measured.

“Your father and I have done everything for you. Everything.”

I’d heard this so many times.

“We only want the best for you, Catherine. We’ve tried and tried to do what’s best for you.”

There was a new note in her voice, and with something close to disgust I realised she was almost pleading with me.

“Well maybe you should just try harder. Maybe you could even try listening to me. I don’t want this, any of it. The world is changing, mum. It’s going to leave you behind. And you might be happy with that but I’m not – I’ll never be.”

I wanted to shake her, to force her to understand what I was trying to say. And then, just for a second, I wanted her to hold me, to hear her say that everything was going to be ok.

The next time she spoke though it was with the special air of venom she reserved for my aunt.

“You sound just like her, do you know that? I knew it was a mistake letting you and Joseph spend so much time together. They’ll poison your mind, the lot of them.”

“It’s got nothing to do with him!”

The heat rose in my cheeks as I thought of Joe. Sweet, angry, confused Joe. It was true he’d opened my eyes to what was out there, but I refused to believe for a second that was a bad thing.

“You’ve got no idea what she’s like, not really. She’ll have completely brainwashed him. No son of hers could grow up to just be happy. There always has to be drama, she never could just be grateful for what she’s got.”

She stood up and smoothed down her apron, forcing me to take a step backwards as she moved into my space.

“In fact you’re more like her than I’d ever realised.”

She swept out of the room then, her head held high, leaving me trembling with rage even as the tears began to prick behind my eyes.

I never had understood why she hated her sister so much, but in that moment something clicked. Mum was afraid of her. Everything she’d done, all of the decisions she’d made: they were the polar opposite of my parents’ safe, boring existence, the very things that could bring it crashing down.

And now my mother was afraid of me, and I had absolutely no idea how that was supposed to make me feel.

Thank you to Sara at Mum Turned Mom for inspiring this post with her prompt: ‘thankful’.

As I’ve been working through my draft, chopping and changing and adding and tweaking, there’s something I haven’t quite been able to reconcile.

On one level, this novel is a thriller. Something bad is happening – right from the beginning. Except my protagonist doesn’t know about it, and we’re seeing things from her point of view. I need to create a growing sense of dread, a sense that all is not right in the world – but from Grace’s perspective, for the majority of the time at least, everything is unfolding as it should. There are moments where her intuition tells her to be careful, but it’s hard to really work these without things seeming ham-fisted. And besides, she’s not stupid: if she was really uneasy then she wouldn’t take the steps she needs to for everything to pan out as it does.

When I was in the planning stages I thought perhaps I could tell the story through multiple voices, weave the different versions of reality through. I soon concluded that this wouldn’t work, that it would give too much away where I wanted to leave the reader guessing.

Except now I’m not so sure…

I wrote a character exercise last week to explore things as my antagonist sees them, and it turns out his voice is so strong that I don’t think I can silence it. He can’t have equal airtime in the novel – it is not really him that this story is about – but I think there can be flashes, moments of insight into the dark mind at work behind the scenes that will colour the reader’s interpretation of the rest.

That’s where I’m at right now anyway. I’m going to see what happens if I let him have his say at a few key points, whether I can manage to craft his interludes so they create that sense of dread without giving too much away. If I can pull it off it should add an element of dramatic irony as things unfold, give the reader a smidgen more knowledge than Grace has herself to filter their reactions to her through.

And if nothing else then just the process will give me more of an insight into what’s driving him, and that can be no bad thing.