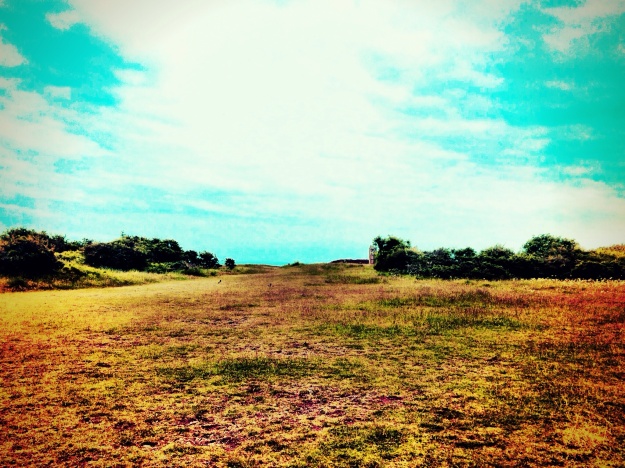 Now that novel number two is temporarily out of my hands once again, my thoughts have been drifting to the next one. Seeds were planted months ago by an inscription on a memorial bench overlooking the sea in Brixham, and in the recesses of my mind a plot has been beginning to form. This week, the voice of my main character has become hard to ignore. And that’s where this scene has come from: a moment in her life that may or may not prove to be significant.

I was fourteen when we first kissed.

We’d gone up to the fort. For a walk, he said, which kept Nan happy. And we did sort of walk, hands in pockets as our feet scuffed the grass. He kept going too close to the edge, sending shingle ricocheting down the cliff as I pleaded with him to move back just a bit.

He laughed at me of course. He never took me seriously, not for a second. It drove me mad! I took everything seriously back then, though I tried my best to pretend I didn’t when I was with him.

It was still warm even though it was after six. A haze hovered on the horizon, blurring the line that separated the air from the sea. The ground beneath our feet was dusty, thick orange dust which coated my toes. Nan kept trying to get me to wear plimsolls but I was happy in my flip flops. I’d have worn nothing at all if I’d thought I could get away with it.

As we walked back towards the car park he broke away, running up the hill and disappearing over the ridge. I ran after him despite my better judgement, ignoring the flailing of my legs. They felt like they’d doubled in length that year. I knew I ought to be pleased, but I didn’t like it. I wanted my old body back, the one I knew.

I stopped when I reached the top, opening the gate and looking out over the field. He was nowhere to be seen. Such a child, hiding from me like that.

Then I heard a whistle. It could’ve belonged to one of the many people that walked their dogs up on the headland but they’d all gone home for their tea leaving us alone in our playground. Besides, I knew it was him.

He was in the ruin, nestled into the corner with his feet flat on the dry mud and his brown knees pointing to the sky. He was rolling a tube of paper between his fingers and grinned at me as I stumbled in.

“You found me then.”

I’d spoken to him about the whistling before. It was degrading, I knew that. And it was because I liked it that he had to stop.

He put the joint between his lips and pulled a box of matches out of the pocket of his shirt. He squinted as he leaned towards the flame, his nose wrinkling with concentration. I’d never noticed he had so many freckles before. They spilled onto his cheeks, competing for attention against his deepening tan.

He inhaled deeply and rested his head back against the stone before blowing the smoke up towards the gap where the roof used to be. His lips were full and red, and as I watched him I found myself licking mine before looking down and shuffling awkwardly from one foot to another.

He cocked his head to one side and patted the ground next to him with his free hand whilst he inhaled from the joint again. I did as I was told.

Out of the sun the air had a faint chill to it, and I was glad of his body next to mine. I leant back against the wall and drew my knees up towards my chest, my bare leg brushing against his. He didn’t move away.

“You know that stuff’s really bad for you,” I couldn’t help myself. I had no idea what I was talking about, not really. I’d never had as much as a toke on a cigarette, let alone anything stronger. I just didn’t have those sorts of friends.

With his next exhale, he sent little fluffy rings drifting up to meet the clouds. I refused to look impressed.

His eyes were only a few inches away from mine, that spark I’d been trying to ignore all summer cancelling out my good intentions.

“Stay there. Open your mouth, just a little.”

I wasn’t sure what he was going to do as he shifted round in front of me, lifting the joint to his mouth again then steadying himself on the wall behind me as he leaned in and pushed his lips against mine.

My lungs constricted as I breathed in sharply and he fell back laughing while coughs shook my core. I couldn’t speak, but I was sure my anger showed in my face. His giggles did begin to subside eventually, and oxygen returned to my blood. With it came a new feeling, a not entirely unpleasant one. My head was lighter, and I began to smile.

Like a mercurial mirror he became serious then, a look I didn’t recognise softening his features. He leant in again and kissed me full on the mouth. I kissed him back.

And then he pulled away and leapt to his feet. I wanted him to do it again but I didn’t know how to ask. So instead I followed him down the hill and we said nothing until we were back at the house where tea was already on the table, getting cold.

He didn’t kiss me for a long time after that. Looking back I almost wish he never had.

Thank you to Sara at Mum Turned Mom for inspiring this post with her prompt: smoke.