We travelled to Dublin this weekend for the wedding of my cousin Tom and his beautiful bride Ciana, and what a shimmering, sparkling wedding it was.

It was about ten degrees colder when we arrived in Ireland than it had been here in Devon, and when we awoke on Saturday morning in our hotel about an hour South of Dublin it was to the most perfect winter day you could imagine. The sky was blue, and the frost had covered the entire landscape in sparkles: there was nothing for it but to wrap up warm and go for a walk. 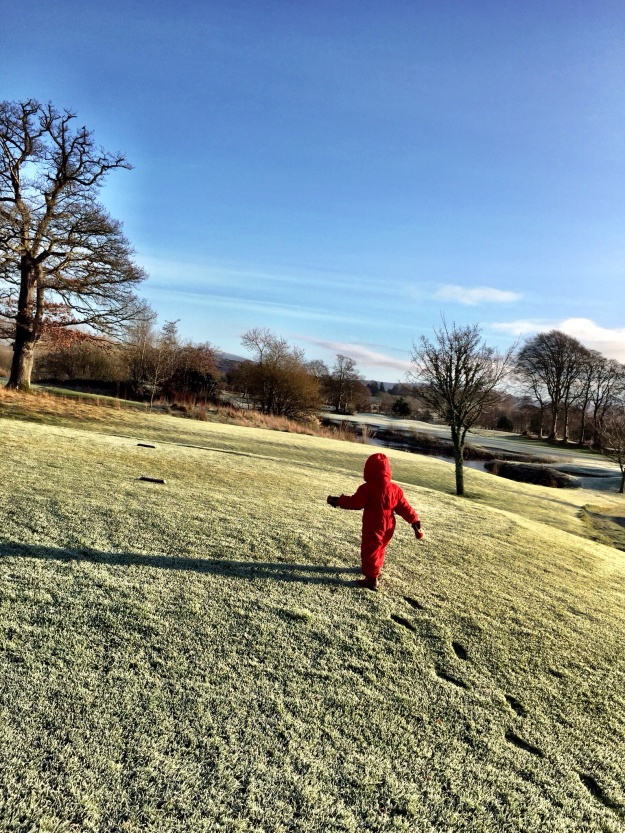 Arthur was fascinated by the crispy grass underfoot, and transfixed by the long, drawn out shadows cast by the winter sun. He was so focused on the immediate sensory overload at first that I’m not sure he even noticed the spectacular scenery around him. I did though, and it took my breath away – especially with this little boy in red running through it.

It was the first time Arthur had really been aware of winter ‘on the ground’. He was still a couple of months off walking this time last year, so it was Spring before he was ready for outdoor exploration.

He was, as always, he drawn to the puddles: but these ones were frozen!

He discovered how cold – and how slippery – this stuff called ice was, and took tremendous delight in stamping on it as it cracked beneath him. 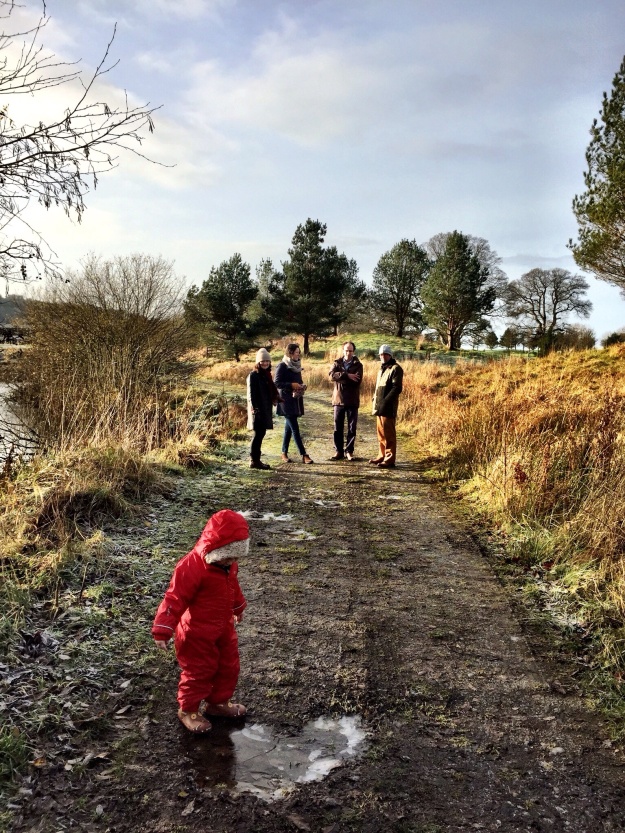 It was one of those walks where the pace was slowed right down so Arthur could take everything in, but it was most definitely worth it for the joy his new discoveries gave him. 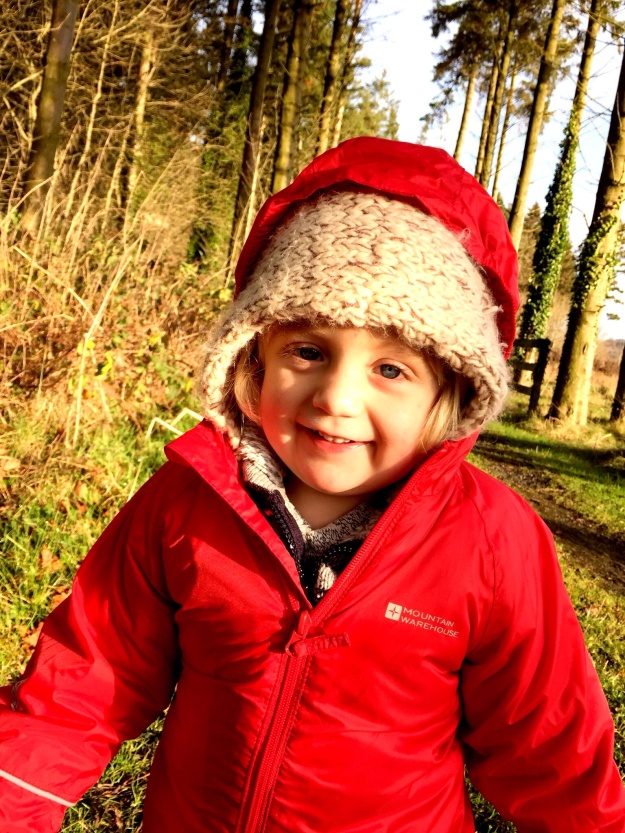 A little chilly but but very much invigorated, we headed in to get ready. I am very glad that Arthur loves dressing up, and he was particularly proud of his sparkly boots – which handily matched my own silver shoes perfectly. Very important to coordinate with your toddler after all! 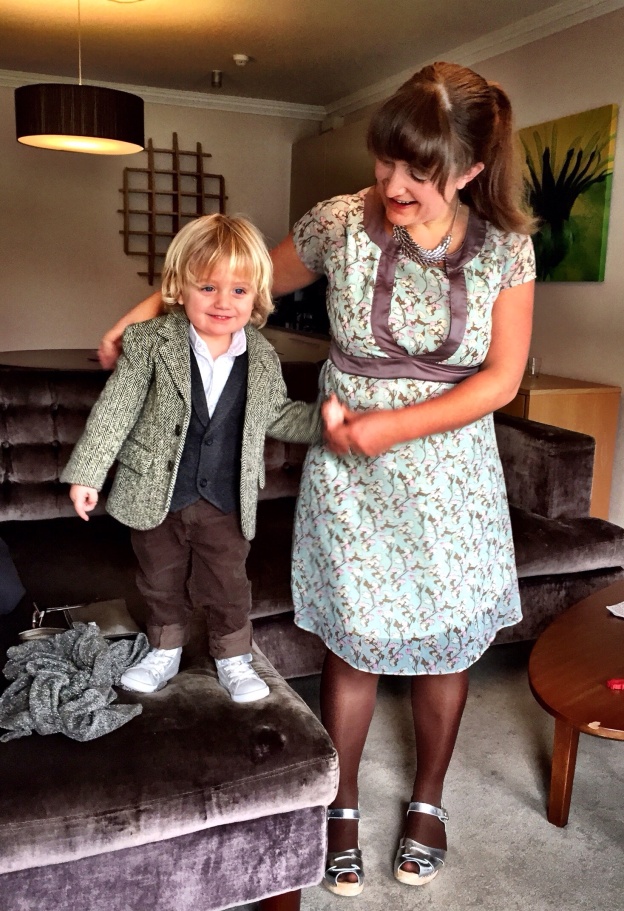 From there we went to the ceremony, which was nothing short of magical. The space was lit by nets of fairy lights and candles, shimmering off the pure white walls and filling the air with anticipation.

They had chosen a humanist ceremony, as Leigh and I had for our wedding, and I found myself welling up with nostalgia and love. After his morning walk in the cold Arthur slept in the sling for pretty much the entire ceremony, giving me the chance to focus on the words. I love how individual and personal a humanist ceremony can be, how different the details are as they adapt to the uniqueness of each couple, but also how the common threads running through are so empowering and all-enveloping, so fundamental – without any of the complications that I find religion can bring.

From the ceremony we headed outside into the chill then back in to the reception. The venue was full of Christmas trees, bringing another layer of magic and sparkle that Arthur just couldn’t resist.

This continued as day turned into evening, with the most spectacular dance floor I have ever seen taking centre stage.

It was the perfect spot for little people to run around on, and in fact the chatter and laughter of children that threaded through the fabric of the day was one of the loveliest things about it I reckon.

For Arthur, though, the band was definitely the highlight. I couldn’t drag him away as they were setting up and he started to realise what was about to happen.

When they did begin to play he was in his element. He watched the first dance, entranced but impatient, and as soon as he could he was up at the front, mirroring the guitarist’s fingers with his own and getting swept up in the music. 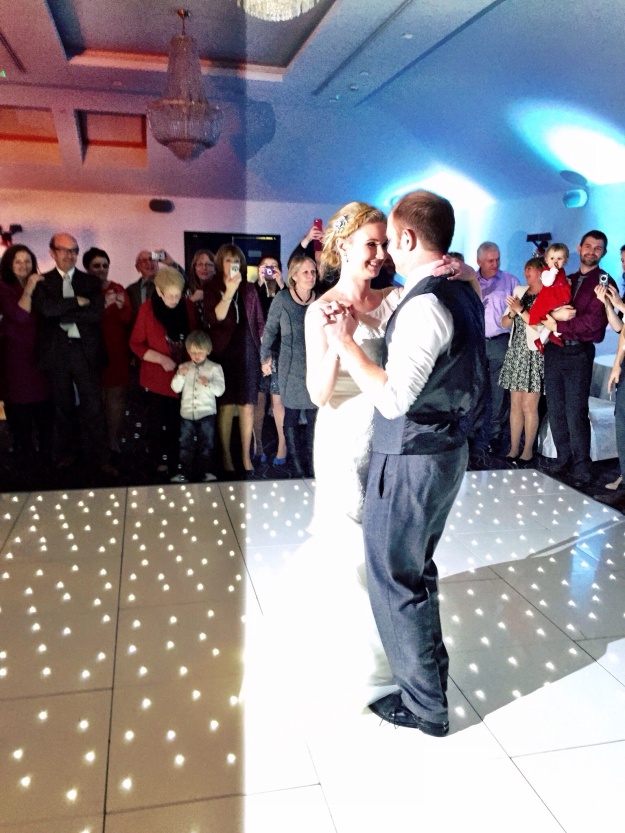 It was a lovely, lovely day, shimmering and sparkling from start to finish. Between the ice and the trees and the twinkly lights it was wonderfully, magically romantic. And now that we’re back home, with Christmas fast approaching, we are well and truly imbued with the festive spirit.