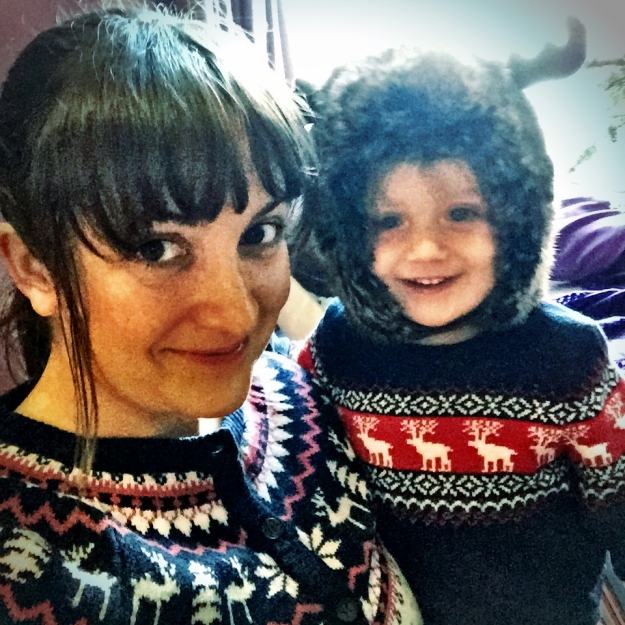 The Christmas spirit has definitely been been hotting up in our house this week. After a gorgeous winter wedding in Ireland last weekend, I’ve come back to a whirlwind of last-minute card writing and continued present making and general festive preparations.

We made it to see Santa on Wednesday, having been invited to the opening of the incredible grotto at The Edge in Brixham. Arthur is beginning to be aware of this mysterious man who he refers to as ‘Christmas time’, and knows that he has something to do with reindeer and presents. But he was very sceptical when I explained over our early dinner that we would be going to meet the man himself.

The Edge was a warm and welcoming bustle of mince pies and mulled wine when we arrived, and when it was our turn to go through we were all a little serious about what we would find. I don’t want to give too much away to those of you who are planning a visit (and if you’re anywhere near Brixham, I very much recommend you do), but the grotto involved trains, hardworking elves and a very impressive Christmas tree – and that was even before being taken through to Santa’s inner chamber.

Though Arthur had been excited, his nerves overcame him when he actually saw that red coat and white beard. He tried to scramble out of the door at one point, but managed to settle enough to come and cosy up on Santa’s sleigh and get his present. And though he didn’t say a word whilst we were in there, it was all he could talk about from the moment he left until he finally gave into sleep.

We’re going to have a very special family Christmas this year I think, and not just because Arthur is so much more conscious this year that something special is happening.

There is still an awful lot to be done, but it is going to be so lovely to see everyone and to get to spend time with Leigh as well: he’s finally finished the toughest term yet in his medical school adventure, so whilst he still has a bit of work to do before January he will mainly be enjoying a well-earned break.

And I think I need a bit of a break from the blog too. This time last year it was nothing more than a twinkle in my eye. Now, 250 posts later, it has become a wonderful outlet for ideas and creativity, and a precious record of Arthur as he grows. It has at times been a little all-consuming too, so downing tools over the Christmas period seems like a very sensible idea.

Besides, I have a new novel to work on. The ideas are all there, but I could do with a bit of headspace to formulate them into something a bit more cohesive so I can make a start on the first draft in January.

I’ll be back on the blog then too, with festive tales and crafting delights to share. In the meantime I have no doubt I’ll still be popping in to twitter and instagram from time to time. But for now, have a wonderful Christmas and a very happy new year. See you in 2015!

My word of the week is ‘Christmas’ and I am also liking up with Sara at Mum turned Mom for her prompt of the same.

9 thoughts on “Signing out for Christmas”