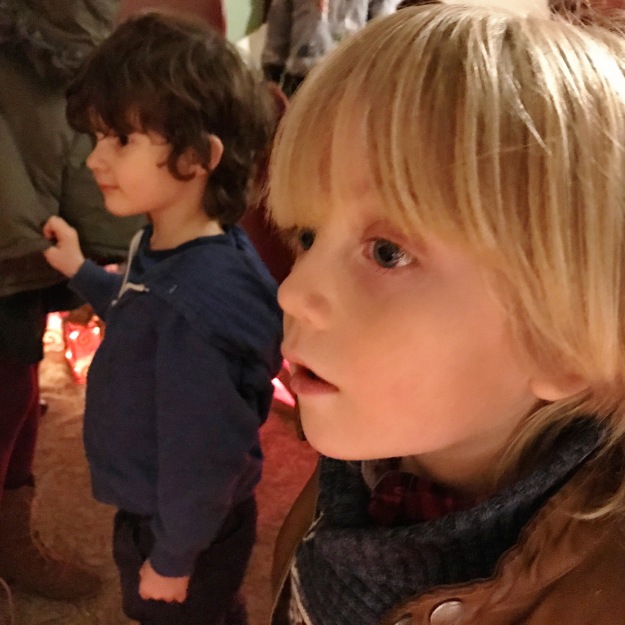 We went to the most magical grotto today: having met one Santa on the train at the weekend this was another quite lovely experience.

The wait was longer than we expected, and the boys were bouncing off the walls by the time we got in. Watching them, though, transfixed by the fairytale forest and hanging on every word spoken by the youthful elves as they readied themselves to meet the man himself, was a powerful reminder of just how young and impressionable they are.

It is going to be a very special Christmas.

The countdown to Christmas has been speeding along this last couple of weeks, accelerated by the party planning for the celebrations of Arthur’s fourth birthday three days later. I genuinely wouldn’t have him any other way, but a different birth month? I think I’d take it. 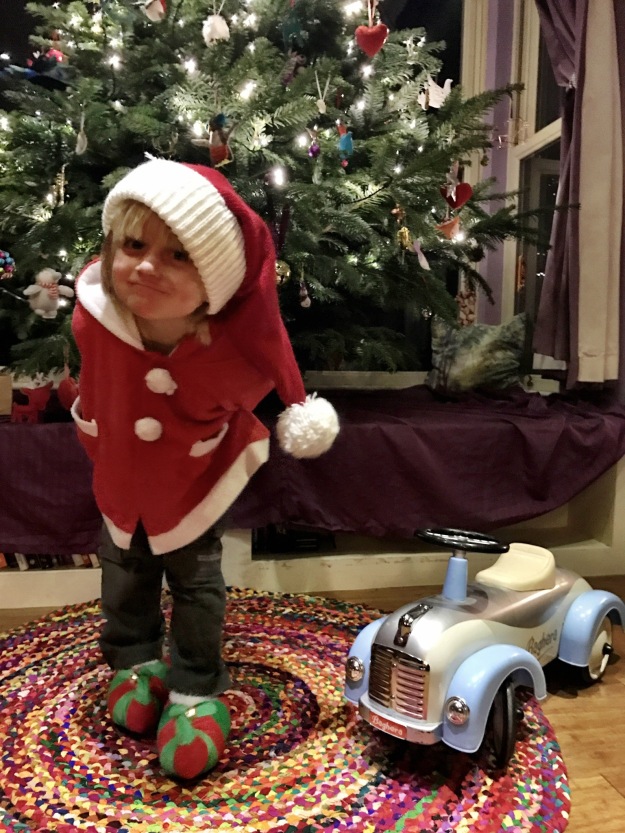 That aside, the whole rapidly approaching festive season has brought with it all sorts of interesting discussion topics – for me and Leigh as well as for us and Arthur.

First off there’s the whole Santa thing. I love the magic of the Santa myth, and got totally sucked into it as a kid. I can see that, with his powerful imagination, it wouldn’t take much for Arthur to get completely swept away by it all too. But I don’t want to lie to him, and I don’t want his trust to be shattered when inevitably the truth is revealed.

So I am trying to find a middle ground – to get him to understand that imagination can be just as real as ‘truth’, and that what you choose to believe in the moment can totally shape your experience.

We have indulged in the ritual of writing to Santa, sending the letter off in the post and receiving a ‘reply’ a few weeks later.

We’ve been to visit Father Christmas too – on the Santa Express on our local steam train line.

But Arthur is aware that there is not just one Father Christmas, and we have taken to referring to his various incarnations as ‘agents of Santa’ – physical manifestations of the spirit of giving that is an important part of this time of year. I’m hoping that when the time comes it won’t be too much of a shift for Arthur to see us as agents of Santa too, and to accept that the truth behind the games we play is rather more abstract.

To be honest my main concern at the moment is that Arthur is a little bit too obsessed with the giving of gifts – or rather the receiving of them. For the last couple of years the whole festive period was a bit of a blur, with a seemingly never-ending flow of presents for Christmas and then his birthday. Now that Arthur’s a little bit older I’m trying to pre-empt this year’s bounty by engaging him in the process of gifting to others.

We started with cards, which we made together – heading to the woods to collect ferns which we brought back and used to print little Christmas trees, decorating them with glitter and gemstones.

Arthur helped me take these to the post office, along with parcels for family and friends – which hopefully in some way will give him a context for his excitement when yet another delivery arrives at home!

I’ve tried to get him to think beyond our friends and family too, to the wider context of goodwill at Christmas time. This is something we’ve tied into the Santa myth: I am utterly uncomfortable with the manipulative rhetoric around the idea that Santa or his elves are watching his behaviour, that if he’s ‘naughty’ there won’t be any presents, but I am trying to engage him with the notion that this is generally a time of year for taking stock, realising how lucky we are, and being especially kind to the people around us.

This has of course brought us back to the original Christmas story, one which for me is as much of a metaphor as Santa given that Leigh and I are Humanist rather than Christian in our beliefs, but one which I think it is important for Arthur to know about.

He started asking questions when we were at a christening last weekend, curious to know who Jesus was. So we told him what we could about what Christians believe, and found a couple of books at the library to help bring the story to life a bit more.

We have even had a go at making our own nativity – something I have never done before, but which Arthur has really loved – and well and truly made his own.

He was interested in the characters, in the angel and the shepherds and the wise men, but as soon as he started to understand that they had all come to see the Baby Jesus he wanted to give his favourite toys a chance to meet this special baby too. Soon the stable was inundated with lego superheroes and Star Wars characters, arriving in their spaceships to see what all the fuss was about.

I was wholly resistant to this at first, dismissing his hijacking of the Christmas story and wanting to make sure he understood the ‘real’ version. But then I realised that perhaps he’d actually found his own truth at the centre of it all – and that, ultimately, is what this is all about.

The Christmas spirit has definitely been been hotting up in our house this week. After a gorgeous winter wedding in Ireland last weekend, I’ve come back to a whirlwind of last-minute card writing and continued present making and general festive preparations.

We made it to see Santa on Wednesday, having been invited to the opening of the incredible grotto at The Edge in Brixham. Arthur is beginning to be aware of this mysterious man who he refers to as ‘Christmas time’, and knows that he has something to do with reindeer and presents. But he was very sceptical when I explained over our early dinner that we would be going to meet the man himself.

The Edge was a warm and welcoming bustle of mince pies and mulled wine when we arrived, and when it was our turn to go through we were all a little serious about what we would find. I don’t want to give too much away to those of you who are planning a visit (and if you’re anywhere near Brixham, I very much recommend you do), but the grotto involved trains, hardworking elves and a very impressive Christmas tree – and that was even before being taken through to Santa’s inner chamber.

Though Arthur had been excited, his nerves overcame him when he actually saw that red coat and white beard. He tried to scramble out of the door at one point, but managed to settle enough to come and cosy up on Santa’s sleigh and get his present. And though he didn’t say a word whilst we were in there, it was all he could talk about from the moment he left until he finally gave into sleep.

We’re going to have a very special family Christmas this year I think, and not just because Arthur is so much more conscious this year that something special is happening.

There is still an awful lot to be done, but it is going to be so lovely to see everyone and to get to spend time with Leigh as well: he’s finally finished the toughest term yet in his medical school adventure, so whilst he still has a bit of work to do before January he will mainly be enjoying a well-earned break.

And I think I need a bit of a break from the blog too. This time last year it was nothing more than a twinkle in my eye. Now, 250 posts later, it has become a wonderful outlet for ideas and creativity, and a precious record of Arthur as he grows. It has at times been a little all-consuming too, so downing tools over the Christmas period seems like a very sensible idea.

Besides, I have a new novel to work on. The ideas are all there, but I could do with a bit of headspace to formulate them into something a bit more cohesive so I can make a start on the first draft in January.

I’ll be back on the blog then too, with festive tales and crafting delights to share. In the meantime I have no doubt I’ll still be popping in to twitter and instagram from time to time. But for now, have a wonderful Christmas and a very happy new year. See you in 2015!

My word of the week is ‘Christmas’ and I am also liking up with Sara at Mum turned Mom for her prompt of the same.