We don’t get much snow down here in Devon, so when I woke up on Sunday morning to pictures of Dartmoor blanketed in white on my Facebook feed I knew we were going to have to go on a bit of a mission.

It takes about an hour to drive there from where we are on the South coast, but every time we do we tell ourselves we really should do it more often. And this time was no different.

We were not the only people whose minds had been captivated by the romance of some Valentine’s day snow: in fact we were beginning to think, as we wove our way up onto the moors behind lines of traffic through decidedly unsnowy scenery, that maybe it wasn’t such a great plan after all.

But then we turned a corner and up ahead of us we saw higher ground. Higher ground with an unmistakeable icing sugar coating, which became more convincingly wintery the further up we ventured.

Ok so it wasn’t Iceland. The ground was wet and muddy in between the patches of snow. And there were an awful lot of other cars. But this being the moors we found our own expanse of ground within minutes of parking up, and Arthur couldn’t care less that it was less than perfect. It was snow!

I got pelted with this snowball seconds after this photo was taken, but it was most definitely worth it.

Arthur loved his first experience of snow: its slipperiness between his fingers, its stomp beneath his boots, its iciness on his tongue. I love how he threw himself so wholeheartedly, as he does, into the new sensations, soaking it all up with glee and concentration.

We had all thought that snow was pretty much guaranteed on this trip, but the weather had other ideas. 18 degrees celsius on Christmas Day in New York anyone? It didn’t let us down entirely though, and for that I am very grateful. 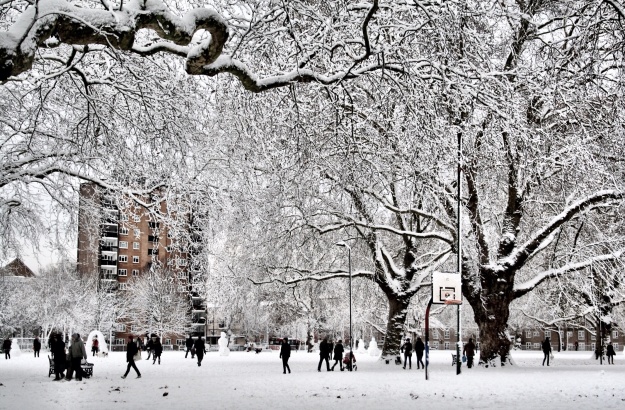 I might not be terribly find of the thought of the nights drawing in or the prospect of endless grey drizzle, but there are actually lots of things about winter days I love.

Snow in particular has a strange power over me. One of my best friends is Canadian, and she thinks I’m mad. But then I’ve never had to deal with the drudgery of it – the blackouts, the snow ploughs, the military precision required just to leave the house. For me snow is magical: transforming city and countryside scenes alike as it deadens sounds and amplifies the light.

I love what it does to people – to total strangers. This picture was taken in London Fields, in one of the particularly impressive bouts of snow we’ve had in recent years. Everyone seemed to be transported back to their childhood, real or imagined, as they built snowmen, made angels with their arms or pelted each other with the white stuff till they collapsed giggling into it. And all of this in what seemed like silence under the branches of trees heavy with their own liberal dusting.

We’re much less likely to get snow in Brixham – being by the sea tends to ward off the coldest of the winter weather, which is one of the the only things I don’t like so much about living here. You don’t need to go too far inland to find it though: frozen ponds and crystallised leaves, delicate icicles and impenetrable frosty ground.

I think it reminds me of the fairy kingdoms I liked to inhabit when I was growing up, the supreme delicacy of the patterns in the ice and the way it makes everything sparkle. There’s something humbling about those moments when nature reminds you of its presence, too: the way it transforms the landscapes we work so hard to control and makes everyday life just that little bit more difficult.

W is for winter.

Joining in with The Alphabet Photography Project over at PODcast.